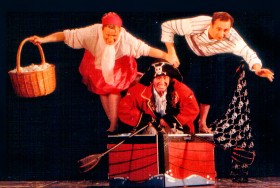 Humorous theater show, puppets and music for children and the whole family.

Spouck, the pirate lives happily, alone on his wild island. To survive, he plunders the boats that crash on his reefs. Boorish in appearance, he speaks little, laughs, shouts, sings loudly… in an incomprehensible language, with a thunderous tonic accent. One day, his Island becomes too narrow, his loneliness unbearable, his meals monotonous, so he goes in search of friends. Throughout the trip, his sinister physique and his harsh language frighten the inhabitants of the different countries he approaches… Until he meets Catherine…

Communication, tolerance, meeting and openness to others are the main themes of this original show, performed in two languages, version in German and French or in English and French. To serve this purpose, it highlights stage games and misunderstandings, melodies and rhythm, puns, the three characters will go through funny and comical situations and will try to understand each other, get along and live together.

A bilingual show on the port side, trilingual on the starboard side which has traveled well beyond the seas, borders and languages ​​to meet its audience.

No comments to show.