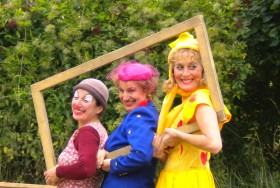 A “strangely serious” show in which three strangers set off in pursuit of a puzzle:
Defining strangeness.

MARGARET  knocks on the door .

MARGUERITE: I’m a foreigner and I want to make friends with you.

PECORINA opens the door  : It is better to make friends at home

MARGUERITE: But you, are you at home?

MARGARET: So! Can you befriend me!?

When an inhabitant of another country comes to us, he is a stranger to us. Yet when he goes to us, while being aware of his status as a foreigner, he is aware of going abroad. However, a foreigner abroad should feel in his element: at home. But in this case, the appellation contrôlée “foreigner” is no longer relevant. Strange, isn’t it?

Three women, three foreign women, set off in pursuit of this puzzle. Impacted by simple and unusual reflections at the same time, by unexpected and puzzling situations, the notion of “foreigner” loses its consistency until it collapses. A failed meeting, an unexpected meeting, and the public embarks abroad, in the strangeness.

We are all 3 more or less foreign – German, Swedish, Italian and more or less strange maybe. We are actress, mime, clown. In short, we do not come from the same world, and that separates us and unites us at the same time.

No comments to show.